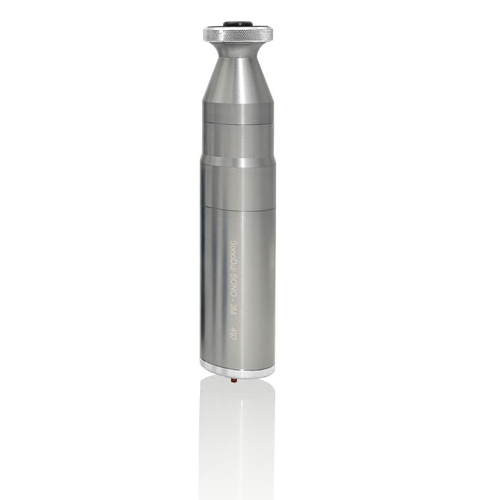 Repeatable, uniform application of force into the material to achieve highly accurate measurements

The rugged, mechanical construction of the motorized measuring probes is designed for everyday industrial use. The massive housing made of anodized aluminum protects the sophisticated mechanics. This provides high long-term stability of the probe in order to guarantee high accuracy requirements for measurement precision. The modern signal processing in the probe with standard USB interface to the display device allows universal adaptation to most devices.

In addition, the probes can be used in a highly variable manner. Thanks to the integrated motor control, the adjustable test load application time (penetration time), and the variety of probe feet, the measurement can be controlled manually, semi-automatically or fully automatically.

Our motorized measuring probes can be used with both the SONODUR 3 mobile hardness tester and the SONODUR R, which was developed for fully automatic production.

The intelligent measuring system of each probe covers the entire hardness range of the classic Vickers scale. Motor measuring probes operate with significantly lower test forces than hand-held probes, making them particularly suitable for sensitive surfaces on which only minimal test indentations are to be made. The field of application includes thin, sensitive surface layers such as in the printing industry, for pistons and plating as well as sensitive components/materials or the measurement of surface hardness in the copper gravure printing industry or the automotive industry.

Our probes work according to the UCI hardness testing method. Here, the probe rod is excited to oscillate in the longitudinal direction with its natural frequency. At the lower end, there is a Vickers diamond which is pressed into the material to be tested. A defined load is applied via a spring system. When the Vickers diamond penetrates the specimen, this vibration is damped and a frequency shift occurs, which can be measured. From this frequency shift, we calculate the hardness value using the Vickers scale after the nominal test force has been reached with the final position of the motor and after the programmed penetration time has elapsed.

The main difference in the procedure compared to the classical Vickers hardness test is, among other things, that the contact area of the Vickers diamond is responsible for the frequency shift of the vibrating rod. In contrast, in classical hardness testing, the indentation of the diamond must be measured optically.

We use cookies on our website to give you the most relevant experience by remembering your preferences and repeat visits. By clicking “Accept All”, you consent to the use of ALL the cookies. However, you may visit "Cookie Settings" to provide a controlled consent.
Cookie SettingsAccept All
Manage consent

This website uses cookies to improve your experience while you navigate through the website. Out of these, the cookies that are categorized as necessary are stored on your browser as they are essential for the working of basic functionalities of the website. We also use third-party cookies that help us analyze and understand how you use this website. These cookies will be stored in your browser only with your consent. You also have the option to opt-out of these cookies. But opting out of some of these cookies may affect your browsing experience.
Necessary Always Enabled
Necessary cookies are absolutely essential for the website to function properly. These cookies ensure basic functionalities and security features of the website, anonymously.
Functional
Functional cookies help to perform certain functionalities like sharing the content of the website on social media platforms, collect feedbacks, and other third-party features.
Performance
Performance cookies are used to understand and analyze the key performance indexes of the website which helps in delivering a better user experience for the visitors.
Analytics
Analytical cookies are used to understand how visitors interact with the website. These cookies help provide information on metrics the number of visitors, bounce rate, traffic source, etc.
Advertisement
Advertisement cookies are used to provide visitors with relevant ads and marketing campaigns. These cookies track visitors across websites and collect information to provide customized ads.
Others
Other uncategorized cookies are those that are being analyzed and have not been classified into a category as yet.
SAVE & ACCEPT

Our Sales Team will connect with you soon.

We will call you back soon